Escape to… the Coast!

BBC One - Escape to the Country - Episode 12: Guernsey

This summer Nicki Chapman travelled to Guernsey to film a dedicated episode of our wonderful island home for BBC One’s Escape to the Country.

The VisitGuernsey team worked with the crew to organise logistics and advise on filming locations and were thrilled the weather was so fantastic for the filming.

Nicki Chapman said this about her trip,

‘Just stunning. First time on this enchanting island for me, certainly won’t be my last. We’ve been blessed with incredible weather, making the filming even more special. I’ll try and revisit this moment in my head, when I’m wedged on a tube in central London next week.’

The episode, aired on Monday 10th October 3pm, and focussed on finding a family home for a young couple and their three children. As well as showcasing the properties on offer, the show offered a glimpse of what life in the Islands had to offer.

Watch it here: BBC One - Escape to the Country, Series 23, Guernsey

During the episode traffic to the VisitGuernsey website spiked. We saw a 44% increase in page views as a direct result of the show airing at 3pm on 10th October 2022, compared to the same time the previous day. 82% of visitors to the site were new visitors.

We also planned the latest VisitGuernsey Consumer emailer to go out shortly after the episode aired, which kept user traffic to the website at a higher level and capitalised on the awareness generated around Guernsey featuring on such a prominent TV channel.

Mary Putra, Director of Communications and Marketing for The States of Guernsey said,

‘We were delighted to welcome Nicki Chapman and the Escape to the Country crew to Guernsey in June this year for a dedicated episode that aired this week. This popular and well-established prime afternoon BBC1 show attracts, on average, just under a million viewers and taps into both a traditional older audience along with baby boomers, two of VisitGuernsey’s three target audiences. The VisitGuernsey team worked with the crew to organise logistics and advise on filming locations and were thrilled the weather was so fantastic for the week they were here on Island.’

See behind the scenes clips and updates from Nicki below. 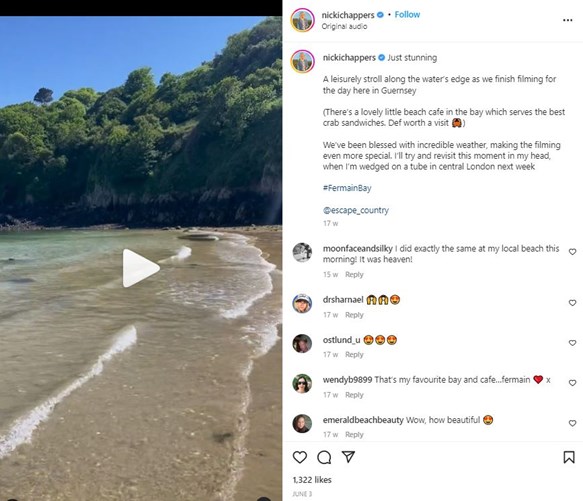 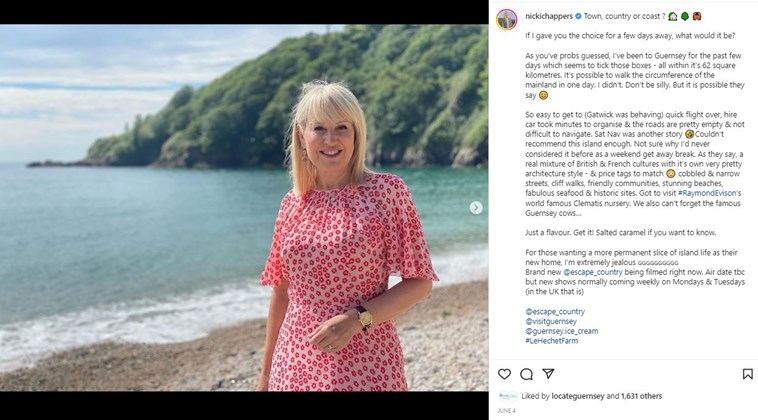